My guess is the family wrote Elaine out of history so as to protect Herb. The bulk of David's estate was to go to a trust to provide for his mentally disabled brother Herb.
The estate was worth some $200,000. Moreover, there was the open law suit claiming $500,000 for the Fugitive.
Had the obituary and law suit papers reflected a divorce, an invitation would be raised for people to ask questions. The ex-wife could appear, claiming that the divorce was invalid.
Under  law, a spouse can claim approximately a third of the estate, regardless of the terms of the will.  She could claim that Dark Passage (published in 1946) was written during the marriage and therefore she had an equitable interest in the proceeds of the suit for copyright infringement.
An alleged child of the marriage could come forward, challenging the will.
When dineros are at issue, anything can happen.  So as to protect Herb, mention of the divorce was omitted.
Where there were no children, a 21 year old divorce decree and being never married are a distinction without a difference.
Posted by louisboxer at 5:27 PM 1 comment:

THE MYSTERIOUS ELAINE by Larry Withers

(L to R): Elaine Astor Goodis, David Goodis and Unidentified Friend
The Mysterious Elaine
By Laurence Withers
I never knew my mother.
After the funeral, we went through her papers and discovered a couple of interesting things. First, my mother was about eight years older than my father; she didn't look it, and never admitted it. Her driver's license was incorrect, and even the date on her gravestone didn't betray her. 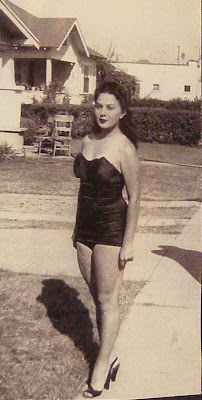 (L to R: Robert Polito, Larry Withers and Sharyn Withers)
The Mysterious Elaine
(As it appeared in the 2007 GoodisCon Program)
By Larry Withers
She could be Cassidy's Girl. I've heard tell she's the Blonde on the Street Corner. Behold, Clara Ervin is another possible incarnation. She's the mysterious Elaine, Mrs. David Goodis, my mother. There's speculation whether she was an inspiration for Goodis' more domineering female characters, or did he seek her out to fulfill his vision of womanhood? I recognize this woman, but what the truth is, we'll never know. Still, even at her worst, David treats this archetype with a certain reverence and humanity, as with all his characters.

Fighting Aces, originally uploaded by popepius.
How many pseudonyms did David Goodis write under?  We may never know!

Posted by louisboxer at 4:39 PM No comments:

THE SERIOUS MOONLIGHT by Mike White