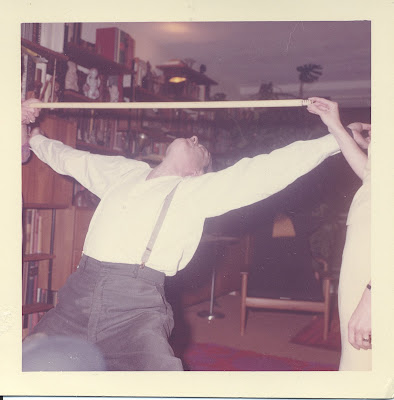 David Goodis doing the Limbo
(Latin limbus, edge or boundary, referring to the "edge" of Hell) - How Low Can You Go?
(DAVID GOODIS essay as it appeared in the 2007 GoodisCon Program)
For those who, like myself, cathect to the work of David Loeb Goodis, 1917 - 1967, there is a Literary Conference in his honor to be held in his home city of Philadelphia, where he lived most all of his life (except for his years in Hollywood), in Logan and on North Eleventh Street (East Oak Lane). It will be held January 5 - 7.

All of Goodis' seventeen or more novels were out of print when he died. Even the Truffaut film of DOWN THERE as SHOOT THE PIANO PLAYER didn't lead to the reissue in his lifetime of any of his prose fiction. Neither did it matter to publishers that Henry Miller had said: "I think the novel is even better than the film."

During the past twenty years, when his books have begun to come back into print, first in France, then in England, now here, even his admirers who have written superlatively of his work: Geoffrey O'Brien, Nick Kimberly, Adrian Wootton, David Schmid and others, still see him in the tradition of crime fiction, when, as Goodis had written to me in 1966, "Very few of the protagonists of my novels operate on a criminal level. They live in neighborhoods of low real estate value, which is a different thing entirely." Goodis' work can be said to be noir, bleak and existential. His novels, in my opinion, are among the most dreadfully powerful and honed in all of twentieth century literature, in any language. He is not, of course, everyone's cup of tea.

No one has ever matched his relentless narrative drive, and the street accurate down home spoken language, and although the classical psychoanalytic theory which runs like a leitmotif through many of his novels is reductionist, the psychology nevertheless has a curious power, as Leonard Kaplan has said, which, I think, can be attributed to the fact that most of his novels were written for a readership of the working-class, and the lower middle class, taking public transport, perhaps reading on the train or tram. It was an America before fast food and malls and the smiles of "have a nice day." OF TENDER SIN, recently reissued, is his SCARLET LETTER, and it also provides a good example of how he refuses to over determine behavior, thus avoiding complexity but, in his best work, striking home. Goodis does not condescend to his characters, ever; he has only empathy for the outsider, for the "internal exile" he himself was. Most of the people who inhabit his books, are "out of it" people who have fallen from grace, and those who have never received any grace, living as they do as invisible marginals on the fringe, tenderloiners, living in a world where the sex and violence hold the Nausea at bay. His compassionate heroines are sometimes warm and feminine, and others are hard-fighting, hard-loving, sometimes hard-drinking, women who are still able to give of themselves to their man. It has been often said that Goodis is the poet of the losers, of romantic loners, both men and women. The primary value in Goodis's world is love.

Because he tempered his narrative gift during World War II in magazines like BATTLE BIRDS and FIGHTING ACES, and MANHUNT, and he is said to have written five million words in five years, sometimes entire issues of a magazine under a variety of pseudonyms, by the time he got to the pulps, after five years in Hollywood under contract to Warners, initially due to the success of his DARK PASSAGE, there was no fat, only lean in his fiction. Everything was pared to its essentials.

A myth grew up around him, that he sought out large obese black women in bars, and would entice them to abuse him, verbally at least; however, gossip is not "lusimeles" and it should be remembered, as Dr. Louis Boxer, Goodis aficionado and Conference organizer, has pointed out: Goodis' last serious lady friend was the distinguished Afro-American artist, Dr. Selma Burke. Goodis died, Dr. Boxer says, of a "cerebral vascular accident" in Albert Einstein Medical Center in North Philadelphia. He had refused to give up his wallet to muggers and suffered a beating which, a few days later, proved fatal. Ironically, no one does fisticuffs like Goodis, at least in his books; one thinks of Hemingway and bullfighting.

In the U.S. in the last century, it is only the very best of Hemingway, Fitzgerald, Faulkner, West (in MISS LONELYHEARTS) (and a very few others: Flannery O'Connor, or Steinbeck, or Richard Wright, or Kerouac at the top of his game, Malamud at his most magically real) that can match Goodis's extraordinary poetic prose power, heightened language as if one were reading a naturalist hallucination without losing narrative flow and beat. This is rooted and grounded most often in his novels in his native Philadelphia, not the center city “affluence” but the hard-core Philadelphia through which "the sullen Delaware" runs, near where Poe and his child-bride lived with her mother a century before. His exactitude of psychological geography, and the meandering through the hard streets, and also the swamps and pines of South Jersey, bring a verisimilitude.

Every commentator on Goodis seems to believe that the haunted characters of his fiction are projections of the writer himself. He seems never to be granted the benefit of aesthetic distance, when, in fact, many of his characters might well be derived from the tortured mental peregrinations of his brother, Herbert, a "paranoid schizophrenic", the brother for whom Goodis provided the financial support. And for his parents as well. Yet, Goodis is always decried for returning to his native city, to his parents' home, to care for his brother, after the Hollywood years, and his Hollywood eccentricities, particularly the lack of desire to spend the money he was getting, can also be viewed in terms of the needs of his family he was supporting. None of his still extant friends remember him as a drinking man; yet, it is assumed the alcoholics in his books, are somehow him.

He didn't die in financial need, as I incorrectly stated in my obituary for him in SIGHT AND SOUND (Winter, 1968/69). He left a considerable estate, which covered his brother's institutionalization after the writer's death.

In a piece on his work published by Laura Rosenthal and Andrei Codrescu in The Corpse, I commented that all of Goodis' novels were a no-exit brand of nihilism, genre within genre since written to formula, layered with despair and loneliness. But like the music of Miles or Coltrane or Monk or Billie Holiday, and jazz pervades his books as it did Kerouac's, Goodis' work does not bring you down, except into deep levels of your own consciousness. He refused to think highly of his great achievement as a novelist, writing to me that most of his novels were "nothing" - although he did say that in addition to DOWN THERE (his masterpiece), he had something to say in FIRE IN THE FLESH and in STREET OF THE LOST, books he then considered his best. I never met David Goodis. I was planning on seeing him in Philadelphia, Spring 1967, and negotiating the film rights to one of his novels, but his sudden death intervened. His death also terminated for all intents and purposes the six figure lawsuit he had prosecuted through a family firm against the makers of the TV series THE FUGITIVE, plagiarized from Goodis's work. After his death, the lawsuit was settled out-of-court in Goodis's favor, but with only a measly financial reward.

There is no religious view in Goodis's work, so that even in those books, like FIRE IN THE FLESH, where there is redemption, there is no way out, only death at the end of it. Yet he does not rule out chance and meaningful co-incidence, the unconscious, the fact of our human divinity as Cid Corman once put it. And, I think, he admires and respects the courage of many of his protagonists to commit to honorable action, even against all the odds. In fact, there is more “redemption” in Goodis’s novels than might otherwise appear. From his last cloth bound published book, his third, and perhaps his most under-rated, BEHOLD THIS WOMAN, a novel which portrays a fat and sensuous and violent and schemingly-intelligent working-class/lower middle-class American Lady Macbeth (whose portrait is lightly sketched in the opening and the closing of the newly reissued THE BLONDE ON THE STREET CORNER), an embodiment of pure evil, to the last novel published in his lifetime, NIGHT SQUAD, there is at the end, the possibility of male-female love relationships deepening. It should also be noted that BEHOLD THIS WOMAN was published in France as LA GRACE (The Bitch, or The Strumpet) and this is an oversimplification since the title also alludes to the protagonist’s daughter becoming a woman, overcoming, if you will, the evil step-mother. It is, of course, a fairy tale, where youth and innocence can triumph, and although the ending is earned, the mature love at the close of NIGHT SQUAD is more satisfying. Goodis was also a master at prose fiction's version of "the pathetic fallacy" - or "thing talk" as it is sometimes called in the hard-boiled world. Something like: Loneliness blew into town after she left and took up permanent residence in his easy chair.

One could blog on, but for now it is enough to note that GOODISCON 2007, is being held, 40 years after his death. More information can be accessed on the web. There is a biography, as yet untranslated, which gives a wealth of information: Philippe Garnier's GOODIS: LA VIE EN NOIR ET BLANC (Life in Black And White).

Bill Sherman, from the Feltonville neighborhood of Philadelphia, is a writer and former university lecturer in England and Wales.
Posted by louisboxer at 9:26 AM