THE WOUNDED AND THE SLAIN

THE WOUNDED AND THE SLAIN
(NY: Fawcett, 1955; London: Miller, 1959);
reprinted by Hard Case Crimes, 2007
“I hope you’ll pardon me.  I’m a trifle hazy this fine morning.  Purely a matter of biochemistry, the natural effect of hundred-proof nectar of the sugar cane on John W. Hemoglobin, resulting in a rather unique color scheme, the red and white playing second fiddle to amber-colored corpuscles.  Incidentally, how in God’s name did I get in this bed?” 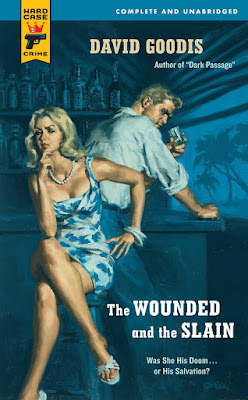 DESCENT INTO HELL / DESCENT AUX ENFERS (Francis Girod, France, 1986)
The Wounded & The Slain (Gold Medal, 1955)
One of the more faithful adaptations of Goodis’ work, in spirit if not in exactness, this French film has estranged couple Alan and Lola Colbert (Claude Brasseur and Sophie Marceau) on vacationing in Haiti, hoping to escape their domestic strife.  Stunningly beautiful but completely untouchable, Lola is has been rendered frigid by the past that haunts her.  Needless to say, this has put a considerable strain on their marriage and on Alan, who tries to drink his troubles away.
Distraught at seeing his bride flirting with another man (Hippolyte Giradot), Alan goes on a bender outside of the safety of his resort walls.  Heading to the rougher area of , he finds nothing but trouble.  When he’s attacked for his thick wallet, Alan accidentally kills a man in self-defense.  Just when it looks like he’ll get away with it, he and Lola are approached by two blackmailers who have evidence of the event in their possession.
From here, things get even more complicated with innocent patsies, corrupt police officials, and double crosses.  Eventually, our couple (the wounded) is redeemed via the murder (the slain).
The tenth adaptation of a Goodis’s fourteenth novel, DESCENT INTO HELL does well to make the main character a writer as he often provides narration through his writing.  Screenwriter Jean-Loup Dabadie also did well to move Lola’s sexually scarring incident from her childhood to her teens/twenties and to create a second blackmailer character.  We see much more of Lola’s character in the film, nearly making her equal to Alan.  We also certainly see a lot of Sophie Marceau playing Lola as the actress spends the majority of her screen time in the nude.
Posted by louisboxer at 7:07 AM

Email ThisBlogThis!Share to TwitterShare to FacebookShare to Pinterest
Labels: The Woned and The Slain