Paul Wendkos: Director who made his name as a pioneer of made-for-television films 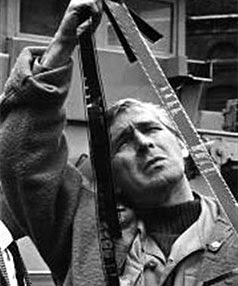 Paul Wendkos, who has died aged 84, had the misfortune of seeing his first Hollywood film become a massive hit. Gidget (1959) starred Sandra Dee as the eponymous 16-year-old “girl midget”, a prototype “beach bunny” chasing fun and romance among California’s surfers. It marked the beginnings of the surf craze which encompassed pop music typified by the Beach Boys and a slew of movies, including two Gidget sequels which Wendkos also directed. Trapped at Columbia Studios, Wendkos never directed a major feature, or had another big hit, but became a mainstay of episodic television, and in the 1970s carved out a substantial career as one of the first, and best, directors of “made-for-television” movies.

Wendkos was born Abraham Paul Wendkos on 20 June 1925 in Philadelphia. He served in the navy during the Second World War, then moved to New York, where he received a BA from Columbia University, then studied film at The New School, which led to his first film, a documentary about blindness called Dark Interlude. He caught Hollywood’s attention with his first feature, The Burglar, an exemplary low-budget noir film, which grew from Wendkos’ friendship with the pulp writer David Goodis, a fellow Philadelphian who adapted from his own novel for the screen.

Shot on location in Philadelphia and Atlantic City, it starred Dan Duryea, featured a rare substantial part for Martha Vickers, and provided an early dramatic success for a young Jayne Mansfield. Harry Cohn bought the film for his Columbia Pictures to distribute, and it may have been Wendkos’ success in coaxing a good performance from Mansfield which led to his assignment to Sandra Dee.

For Columbia Wendkos also directed another interesting crime film, The Case Against Brooklyn (1958), two war films (Tarawa Beachhead, 1958, and The Battle Of Coral Sea, 1959) and the off-beat evangelical drama Angel Baby (1961). In 1958 he began directing for television, with two westerns for the prestigious “Playhouse 90” series.

After working on Robert Taylor’s The Detectives, he became a lead director on The Untouchables, the edgiest and most noirish of all television crime series. He was sought after for episodic television throughout the Sixties, including long runs on shows like I Spy and The Invaders. Meanwhile, his film career remained stalled in the Bs, though Guns Of The Magnificent Seven (1969) is an entertaining sequel, and The Mephisto Waltz (1971) is a wellmade rip-off of Rosemary’s Baby starring Alan Alda and Jacqueline Bisset.

The last of his 12 feature films was Special Delivery (1976) an early Cybill Shepherd vehicle. Wendkos directed an NBC “movie special”, Fear No Evil (1969), a dry run for The Mephisto Waltz, but his career in made-for-television films mirrored his feature film path. He made a number of excellent crime dramas with the pulp writer David Karp, who once described the ease, in those early days, with which he and Wendkos could go to a network with a one-line pitch and get the immediate go-ahead to spend half a million dollars. Brotherhood Of The Bell (1970) and The Family Rico (1972), based on a Georges Simenon story, are particularly hard-edged.

Footsteps (1972), a sports-fixing drama, was nominated for a Golden Globe, but Wendkos’ reputation for directing actresses would form the core of his best work, including The Legend Of Lizzie Borden (1975) starring Elizabeth Montgomery, with whom he had worked on “Playhouse 90”; A Woman Called Moses (1978) with Cicely Tyson playing Harriet Tubman, and The Ordeal Of Patty Hearst (1979).

He directed a TV pilot film, Underground Man (1974), based on Ross MacDonald’s detective Lew Archer, and worked, uncredited, on the subsequent TV series, which Karp executive- produced. But such projects gave way to his both producing and directing the hugely popular mini-series, Harold Robbins’ 79 Park Avenue (1977). He continued to work with glamorous actresses taking serious dramatic roles, such as Raquel Welch in Right To Die (1987), Lindsey Wagner in The Taking Of Flight 847 (1988), or Loni Anderson playing the 1930s actress Thelma Todd in White Hot (1991). But his best work remained hard-edged, including two prison dramas, The Ordeal Of Dr Mudd, with Dennis Weaver as the doctor imprisoned for treating Lincoln’s assassin, or Six Against The Rock (1987), based on the 1947 escape attempt from Alcatraz.

The last of his 55 TV films or miniseries was Different (1999) with Annabeth Gish as a disabled girl and Lynn Redgrave her mother. Wendkos died of a lung infection, after a long illness following a stroke. His first wife, Ruth, predeceased him in 1978. He is survived by their son, Jordan, and his second wife, the former NBC programming executive Lin Bolen.