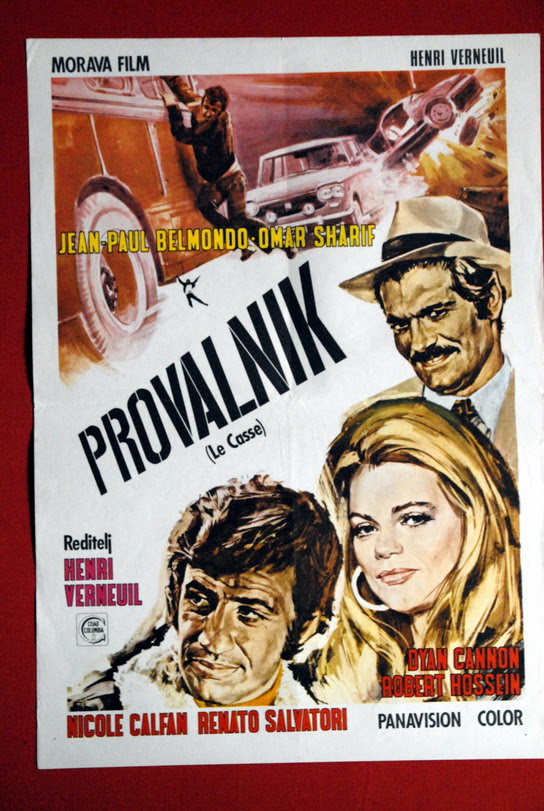 For the first five minutes, about as long as the main title credits last, Henri Verneuil's "The Burglars" suggests a degree of technical competence, of simply knowing what to do next, that is rare enough in movies these days to perhaps make up for any lack of real quality—at least to the level of passable entertainment. But by the second five minutes, technical competence has become technical quirkness, and before a quarter of an hour has passed "The Burglars" reveals itself as yet another international caper film—this time, set in Greece—that does nothing very well and almost everything in excess.
The excesses start early, with the caper, which takes place at the beginning rather than at the end of the movie. It is a jewel theft and it involves opening a safe with the aid of a handy attaché case that contains an X-ray vision TV camera, TV screen, tape recorder, three kinds of computers, miniature hand drill, metal-working vise, keys-made-while-you-wait machine such as you find in your local hardware store, and an instruction booklet. Such a machine might excite the envy of James Bond's armorer, or the delight of Rube Goldberg. But what it does for Henri Verneuil is to fill up a great deal of film time with a device rather than with an action, and that is exactly the method by which all of "The Burglars" has been made.
The devices extend to an endless (and pointless) car chase, a warehouse full of grotesque toys, an automated harbor-side granary, a spicy nightclub, and a spicy meal in a Greek restaurant — take out 10 minutes to photograph and explain the local cuisine. There are also two murders. The only reason for the first murder is to justify the second, so I suppose they belong in the category of mechanics as well.
Under Verneuil's direction, characters resolve themselves into a collection of emphatic mannerisms — the way a cigarette is lit, a nervous habit with the hands — which, together with the wooden English-speaking voices dubbed for most of the cast, tends to make people into things: cleverly automated, but things nevertheless.
There is, of course, a plot. The plot pits a good crook against a bad cop and places a million dollars worth of emeralds in the balance. Jean-Paul Belmondo plays the crook, Omar Sharif plays the cop, and Dyan Cannon plays an enigmatic woman attached to both of them. I was especially taken with Miss Cannon's part, which seems not so much a role as a succession of brief guest appearances requiring mainly that she smile and walk and wear clothes.
"The Burglars" opened yesterday at the Loew's State I and Columbia I theaters.

Posted by louisboxer at 5:19 AM