THE MOON IN THE GUTTER reviewed at mattie9716207


Streaming Moon in the Gutter Online 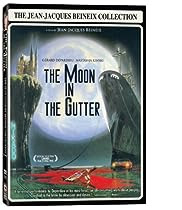 This brilliant film is an example of existential angst wrapped up in a modern Noir type of packaging. It was not truly appreciated when released in the theaters but is well worth watching and owning. The film is so engrossing that the reading of the dialogue is not wearisome as some foreign films are. The directors stylistic use of images to hint at and suggest deeper themes is truly artistic. Not only that, the book it is based on is an often overlooked novel by one of America’s less appreciated authors David Goodis. He has often been the author of books chosen for the films. His 1st novel DARK PASSAGE was, of course, a challanging vehicle for Bogart. You will not regret purchasing the film. But PLEASE read the book too. You will never regret the experience of seeing the lonely of the loser struggling against all odds just to survive as a descent man in a world set against him. Good acting by Gerard and Natasha as well. Money well invested.
Buy,Download, Or Stream Moon in the Gutter! Click Here
Richard Leo Jackson
Jean-Jacques Beineix recently stated (transl.) “An auteur does not speak the truth” and here, within this enormously powerful film, he but flirts with reality, while most of the director’s creative fires feed upon his singular employment of colour and set design. The style of Beineix, as a cinematic architect, may be designated as Rococo with, as he avers, a preeminence of (transl.) “atmosphere over narrative”, fostering an element of whimsy, greatly enhanced by his recognition of a symbolic authority resting upon commercial advertising and its adjuncts. A studied development of exaggerated imagination marks the film, each frame being carefully composed for a production that originally extended to over four and one half hours, in the face of Beineix’ assertion that he abhors filmic structuring. This organizational factor, at least in part, stems from an obligatory reflex of the director as recognition of the film’s source, a novel by David Goodis, wherein the action occurs primarily at and about dockside Philadelphia, transferred here to an undesignated Marseille, and with the novelist’s prototypical women intact, one, Loretta (Nastassia Kinski), angelic and carnally unattainable, (”you are pure” declaims Gerard Depardieu to her), the second, Bella (Victoria Abril) triumphantly lusty and possessed of will such as the work’s protagonist, Gerard Delmas (Depardieu) apparently does not have. Delmas is compulsively drawn to the site of his sister’s gruesome death by her own hand following her sexual violation, hoping to discover keys to what prompted her suicide, to the identity of her assailant, and to a rationale behind his own obsession. Thus is formed a basis for a plot, such as it may be, yet style is properly victor over substance with this undervalued and enigmatic piece that is nearly all filmed in studio, the greatest portion lighted by arcs and photo floods, with scoring contributed in elegant and operatically motival fashion by Gabriel Yared, and paced throughout, as Beineix describes it, with (transl.) “slow gestures forming the choreography.”
Posted by louisboxer at 5:47 PM