What Are You Afraid Of?
We’ve all experienced messages from beyond the silver veil, whether we want to admit it or not. Some people take no notice, ignoring these outreaches. Others embrace them, seeing them as evidence of an expanded universe. Whether these stories frighten or comfort, we are reassured.
In my youth, I worked for various museums and gained a passion for the science of collecting folk culture. These personal experiences need to be recorded and added to this rich archive, presented for scholar and seeker. We’ve already established an archive of collected stories that have never been recorded before.
The reading of collected personal ghost stories as part of our outreach program to record folklore through social media, email and community events. Horror material including interviews with horror authors, the reading of classic ghost stories and discussions of the industry. And we will be producing interviews with ghost hunting groups. We will be recording this podcast from notoriously haunted locations.
The broadcast will be no longer than an hour except for the last episode which will be transmitted around Halloween.
So we need true stories. They need to have been personally experienced by the author or someone close. The accounts should be in their own words as if telling the story to a friend or in an email. The stories work best when around 1,000 words, but we have done longer sagas.
We need help gathering stories, spreading the word so people will send us their accounts. We’d also be glad for any ideas for segments or general horror material for the show. We can offer promotion.
Email us your personal true ghost stories at whatareyouafraidof117@gmail.com
The Website: ghosthostwithfoxandphil.wordpress.com
Twitter: @pfwhatafraidof
https://ghosthostwithfoxandphil.wordpress.com/


Posted by louisboxer at 5:20 PM No comments:

When Paris was liberated from the Nazi occupation in 1944, an album of 85 photographs was found in a shop that had been used by German soldiers assigned to the “Furniture Operation” (Möbel Aktion), the official name for pillaging apartments that had been inhabited by Jews. The snapshots reveal a surreal display of furniture and everyday household goods as if it were an Ikea supermarket, merchandised to catch the shopper’s eye. Except in this case, the “shopper” was the Nazi, the “sales assistants” were Jewish prisoners and the “product” on sale had been looted from their Parisian homes.

Most of these photographs were taken inside a Parisian department store called Lévitan, opened by a Jewishman called Wolf Levitan in the 1930s to specialise in furniture. Located at 85-87 Rue Faubourg Saint Martin in the 10th arrondissement, the building was confiscated from its former owner by the Nazis. Below is a photo of how the store looked before the Nazis moved in.

Everything had been left behind, even down to the cash registers. But not only did Lévitan become a place for Nazi worthies to browse stolen Jewish household goods, picking out things for themselves before being sent off to Germany, the former furniture store also became one of the several Nazi forced labour camps inside occupied Paris, known as the Lévitan camp…

While the first three floors were used for the stock, the fourth was used as a rudimentary dormitory for the 795 Jewish prisoners who were “employed” there between 1940-1944, selected from the Drancy internment camp in the northern suburbs (the last stop before being sent to an extermination camp).

Mostly women, but also a specialised workforce of craftsmen, clockmakers seamstresses, potters, restorers and such, were forced to sort, repair, classify, stack and pack the furniture that had been mercilessly plucked from the very homes of their friends, families, neighbours and community who had been sent to their deaths.

So much was pillaged from Jewish homes that it wouldn’t have been unlikely that the internees at Lévitan could have come across items from their own home.

They had taken everything, not just the expensive stuff. The displays of the most everyday objects such as kitchen saucepans, household tools, even bedsheets, show it was as much “a process of destruction and anonymization” as it was of greed.

The Furniture Operation’s archives and records were destroyed at the end of the war, but not this one. The German soldiers tasked with photographing seized Jewish art and furniture had done such a good job at documenting it all for inventory reasons, it was a “taxonomic look at spoils to be restored”, serving like an administrative document, witnessing the pillaging work being carried out. After the war, the discovered album of photographs was brought to Munich by one of the famous ‘Monuments Men’ James R. Rorimer (who inspired Matt Damon’s character in the film) as part of a mission to collect documents and information potentially useful for retracing German-seized artwork in the French capital.

The album is kept in the German Federal Archives in Koblenz, and in a new book by sociologist Sarah Gensburger, all 85 images have been published with fascinating background analysis in Witnessing the Robbing of the Jews. The album also includes some unique photo coverage of the Louvre Museum as a place for the looting, hoarding and theft of the Jews.
Gensbrger speaks about how one photograph in particular shows how the mission of the Nazi “Furniture Operation” was not so much about making a profit as it was to erase and destroy…

“Approximately seventy paintings are visible in the image, taken in one of the rooms of the Louvre Sequestration area. That only the backsides of the paintings appear in the photograph suggests that as a whole the images were meant as proof of the administrative work accomplished… the photographs were not intended to display the quality of the art. Here the administrative value of the paintings is nothing but the mass they represent, and the quantity of objects reflects … the quantity of individuals concerned by the racial extermination process.”

Of the 795 Jewish prisoners forced to work in the Nazi supermarket of their stolen belonging, 164 were deported to death camps. The former department store on Rue Faubourg Saint Martin is now the seat of an advertising agency. A small plaque on the building’s facade commemorates what happened there.

Sarah Gensburger’s book, Witnessing the Robbing of the Jews: A Photographic Album, Paris, 1940-1944 is available to buy on Amazon.

via Slate.
Posted by louisboxer at 9:02 AM 9 comments:

Jay Gertzman's Pulp According To David Goodis: Incest and Its Shadows

PHILLY GOTHIC: INCEST AND ITS SHADOWS
That is the title of the chapter I have just finished.
In Of Tender Sin (1952), Goodis not only shows he can write very well about incest in a pulp paperback, but can do so with considerable depth, using not only Freud but Faulkner’s The Sound and the Fury. Goodis’ characters are cursed by family dysfunctions, just as the Compson family is .
Tender Sin's protagonist, Al Darby, raped his sister at age 12 (she was 15). It has been festering as repressed memory, until one night he has a "shattered dream." He is about 30 now, with a good job and loving wife. He is compelled by masochistic guilt to take up with a woman whose platinum blonde hair and green eyes mirror his sister's (she is not a factor in the story, but the woman Al visits is her opposite--a masochist who begins by carving her initials in Al's chest). I think Goodis uses Hasidic folklore here.
Goodis’ shadows-of-incest novels (Of Tender Sin, Somebody’s Done For, The Moon in the Gutter, The Burglar) are a kind of Philly, and south Jersey, Gothic: incest, suicide, rape, impotence, demonic gangsters, a castrating demoness from the waste hinterlands of the Old Testament, masochism resulting from guilt and desire for infantile stupor, a lust for pain and death, and a carefully documented regional setting which has a hand and voice in the madness.
Yes it's melodrama, yes's pulp romanticism, yes it is sleazy. And it is fascinating and introspective.

Posted by louisboxer at 7:40 AM No comments:

31 FAIRLY OBSCURE LITERARY MONSTERSHere is a brilliant synopsis, with gripping images, of stories of doppelgangers, species of madness, and investigations of the various selves within one tortured psyche. The list is not only a great guide to horror noir, but also reminiscent of the kind of suffering, and need to explore its sources, that makes some of Goodis' nightmares and noble losers as scintillating as they are.


Halloween used to belong to the monsters. Tracing a perfect near-continuum from the Frankenstein’s Monsters and Gill-Men that papered many a boyhood bedroom to the disturbed teenager’s diet of Lovecraftian doom and the unlaid English major’s repository of Victorian dreadfuls, the creatures of the night once held a monopoly on populist hair-raising. But in the hallowed eves of today, you’re more likely to see the harbingers of nostalgia—the likes of Urkel, Carmen Sandiego and drag Monica Lewinsky—than the emissaries of the undead, the restless hunger for immortality, lycanthropy, and Modern Prometheum seemingly slaked by Sexy Corn, rock star wish-fulfillment and an endless contest to achieve the slyest wordplay couple costumes (last year’s winner: Baroque-en Record and Edwardian Scissorhands) or tastelessly topical shock valets (I don’t mean you Binders-Full-Of-Women, I mean you, Zombie Jon Benet Ramsey). When did the stop-motion lizard people of the late-night circuit, the high gothic of Mary Shelly and Siouxsie Sioux, become passé and what is to be done when Bela Lugosi is forced to take a backseat to SpongeBob and Shrek? And who will haunt the suburban thoroughfares and laborsome loft parties when we are gone? For those of us that borrowed our friends’ cars to see the midnight showing of The Hunger and maintained a preference for muppets over CGI, monsters weren’t a fad, but a lifestyle. Assigned Ayn Rand and A Separate Peace, we snuck away to read Anne Rice, I Am Legend,and Poppy Z. Brite. Once the moon was full enough to cover every one of us; adolescent America was one big Midnight Society gathered around the campfire and we all had hooks for hands.
Fortunately, literature—even as compared to movies and bartender tattoos—isn’t just full of monsters, literature is monsters. Admittedly, the most memorable killers have come in human(ish) form, from Blaise Cendrars’ Rippers-eque Moravagine to sign-of-the-time slashers like Patrick Bateman and Hannibal Lector. But that’s not to say that books aren’t rich with waking nightmares, undigested psychological ectoplasms and tentacles in general. The following list aims to undo the long influence of irony with its evil twin and opposite number: deliberate obscurity and humorless elitism. All vampires, Gorgons, flesh-eating cadavers, Kaiju and denizens of the Monstrous Manual have been scrupulously excised. This, if you dare, are the well-nigh forgotten monsters of classic literature, because the idle past is always preferable to the overfamiliar present, and true monsters are not just the embodiment of period anxieties, but the horrific realization of the future. For that is where you and I are going to spend the rest of our lives.

Posted by louisboxer at 7:36 AM No comments:

Just wait and see!
Posted by louisboxer at 2:47 PM No comments:

Sleuth Sayers got it right with JEWISH NOIR 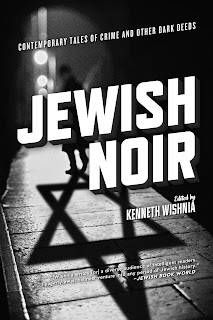 Posted by louisboxer at 10:02 AM No comments: