The New York Post, Prader Willi and Entertainment for the Monarchs! 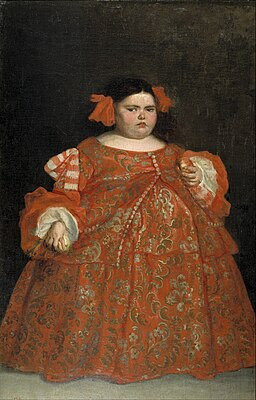 This work is an example of the Baroque taste for representations of freaks of nature and the attraction of people with some of physical or psychological anomaly. Here it takes the form of a depiction of a girl of extraordinary size, probably due to a hormonal imbalance. Eugenia Martínez was taken to the court in 1680 and her portrait was painted there by Juan Carreño at the direct order of King Carlos II.
The painter depicted her dressed, but also nude, in a companion painting (P2800). In the present work, her deformity is emphasized by the magnificent flowered red dress that drapes over the huge size of her girl's body. Its color makes the nudity of the companion work all the more explicit. The placement of the model over a neutral background follows the tradition of Spanish court portraiture.

A portrait of Eugenia Martínez Vallejo, nude and adorned with grape leaves and grape clusters, making this an allusion to Bacchus, the Roman god of wine.
In 1680, this girl was taken to the court to be exhibited because of her extraordinary proportions. Far from its current negative connotations, this must be understood in terms of the taste for freaks of nature passed down from the sixteenth century and still present in the seventeenth, when buffoons and different entertaining personages lived at the Palace in order to amuse the Monarchs and their children.