A RETURN TO DAVID GOODIS by Philippe Garnier 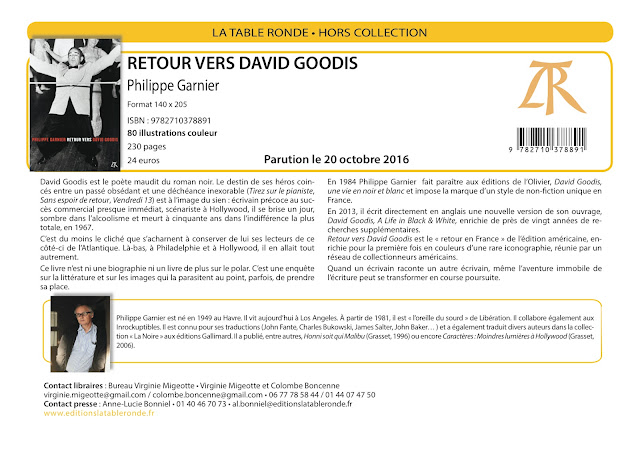 David Goodis is the cursed poet of noir. The fate of his heroes -- stuck between a haunting past and an inexorable decline (Shoot the Piano Player, Street of No Return, Black Friday) mirrors that of the precocious writer himself, who had known almost immediate commercial success as a screenwriter in Hollywood. He collapses one day, sinks into alcoholism and dies at fifty in 1967, to absolutely total indifference.

At least that’s the cliché that his readers on this side of the Atlantic persist in maintaining of him. Over there, in Philadelphia and in Hollywood, the exact opposite was true.

This book is neither a biography nor is it a book on the thriller genre. It is an investigation of literature and the images that infect it, to the point that it sometimes replaces it.

In 2013, he wrote in English a new version of his work, David Goodis, A Life in Black & White, enriched by nearly twenty years of supplementary research.

A Return to David Goodis is the “the return to France” of the American edition, enriched for the first time in color with rare illustrations, brought together by a network of American
collectors.

When a writer tells a story about another writer, even the stationary adventure of writing can be transformed into a high-speed chase.

He was born in Le Havre in 1949. Since 1981, he has been “the ear of the deaf” for the newspaper Libération. He also contributes to Les Inrockuptibles, a French cultural magazine. Garnier is known for his translations (John Fante, Charles Bukowski, James Salter, John Baker…) and also for translating a variety of authors in Gallimard’s La Noire series. He has published, among other titles, Honni soit qui Malibu (Grasset, 1996) as well as Caractères:
Moindres lumières à Hollywood (Grasset, 2006). 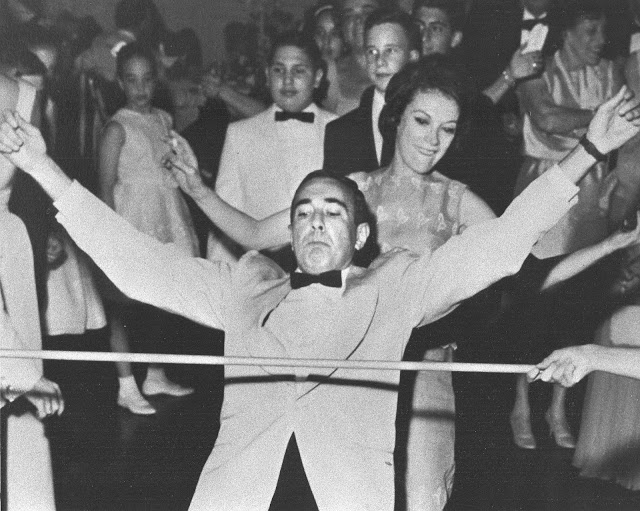 Goodis and THE BAD AND THE BEAUTIFUL

Lana Turner in THE BAD AND THE BEAUTIFUL with David Goodis's CASSIDY'S GIRL making a cameo in the book rack!

The Bad and the Beautiful (1952) is director Vincente Minnelli's (and producer John Houseman's) quintessential movie about Hollywood and moviemaking. MGM's popular hit, with David Raskin's soundtrack and Robert Surtees' great B/W cinematography, was an entertaining, noirish melodrama. It tells the steamy story of the ruthless eighteen-year rise and fall of a tyrannical, manipulative Hollywood movie tycoon - told in flashback and from multiple perspectives (from the point of view of a director, actress, and Pulitzer Prize-winning writer).
The brilliant film about the behind-the-scenes machinations, workings and atmosphere of the celluloid world was written by Charles Schnee and based upon a short story (in the February 1951 issue of Ladies' Home Journal) by George Bradshaw titled "Tribute to a Bad Man." The film's original title was changed because it didn't make any reference to the female star, Lana Turner. [The central character, a recently-deceased, scheming, unscrupulous Broadway producer, was shifted to a living, megalo-maniacal Hollywood producer seeking a comeback.]
It was one of the first in a long succession of films (some cynical and critical) that satirized, skewered or examined the makings of films in the tawdry 'Hollywood' dream factory, including Show People (1928), A Star is Born (1937), Preston Sturges' Sullivan's Travels (1941), Billy Wilder's Sunset Boulevard (1950), the same year's and studio's Singin' in the Rain (1952), A Star is Born (1954), Joseph L. Mankiewicz' The Barefoot Contessa (1954), Robert Aldrich's The Big Knife (1955), The Goddess (1958), Minnelli's Two Weeks in Another Town (1962), The Oscar (1966), Truffaut's Day for Night (1973), John Schlesinger's The Day of the Locust (1975), The Last Tycoon (1976), The French Lieutenant's Woman (1981), Robert Altman's The Player (1992), and many more. Trailers, however, described this picture as "not the Hollywood of yesterday, but Today's Hollywood, showing the working of both a great motion picture Studio and behind-the-scenes of what makes Hollywood tick."

On Saturday, October 29, 2016, the International Association of Crime Writers/North American Branch (IACW/NA) will present the 2016 Hammett Prize at NoirCon! The IACW/NA will also sponsor that afternoon's lunch for NoirCon attendees.

For more information on the award, please visit the IACW/NA website.