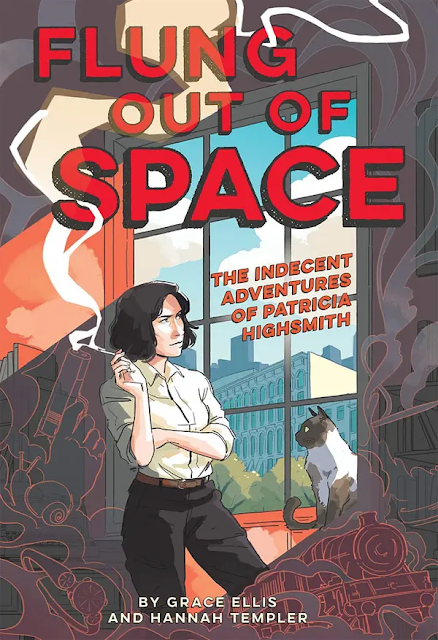 The graphic novel, Flying Out Of Space: The Indecent Adventures of Patricia Highsmith, is being drawn by Hannah Templer, artist on titles such as  GLOW, Samurai Jack, Jem and the Holograms, Captain Marvel, and Tomb Raider, and creator of Cosmoknights, an original graphic novel series published in 2019 by Top Shelf Comics. This will be Hannah and Grace's first work together.

A fictional and complex portrait of bestselling author Patricia Highsmith caught up in the longing that would inspire her queer classic, The Price of Salt. Flung Out of Space is an imagined portrait of the wild and complicated figure that was infamous crime writer Patricia Highsmith. As the story opens, we meet Pat begrudgingly writing low-brow comics. A drinker, a smoker, and a hater of life, Pat knows she can do better. Her brain churns with images of the great novel she could and should be writing—what will eventually be Strangers on a Train (which would later be adapted into a classic film by Alfred Hitchcock in 1951).

Pat is a chronic womanizer, but she's ashamed of being gay, and so on the recommendation of her therapist, she enrolls in conversion therapy, where she meets many of her future sexual conquests. This is also not just the story of a queer woman, but of a queer artist. Written and illustrated by two heavyweights in the comics world—Grace Ellis and Hannah Templer, it's a comic about what it was like to write comics in the 1950s, but also about what it means to be a writer at any time in history, struggling to find your voice.

Flung Out of Space isn't a rosy portrait of queer life, but rather an unflinching one. Ellis's savvy writing combines with Templer's stunning illustrations to create a work that will intrigue and fascinate comics fans. An afterword written by Highsmith's authorized biographer, Joan Schenkar, contextualizes the writer's life with this fictional portrayal and offers insight into Highsmith's complex legacy.

Highsmith was unapologetic but guilt-ridden, talented but self-sabotaging, magnetic but withdrawn, vicious but hilarious. In short: She was a hell of a woman and a hell of a protagonist.

The book is part of a line of LGBTQIA focused graphic novels at Abrams, called Surely Books, curated by Mariko Tamaki. On social media, Grace Ellis has briefly talked about the planned book, saying "Oh man, y'all are gonna L O V E this Patricia Highsmith book I'm working on, it's basically "Carol: The Awakening"… I can't wait for the day when my mind-volcano erupts Patricia Highsmith anecdotes all over Twitter, turning this whole website into a Pompeii preserved in 1950s lesbianism… It's a project I've been kicking around for years, and when Mariko told me about this imprint, I knew I had to do it with her. It's an honest-to-god dream come true."

Flung Out of Space: The Indecent Adventures of Patricia Highsmith will be published on February 1st 2022 from Abrams ComicArts – Surely, with an introduction by Joan Schenkar, playwright, author, and literary biographer, including the book, The Talented Miss Highsmith.